What is Gum Disease?

Have you ever experienced swollen or bleeding gums right after you’ve completed your dental hygiene regimen? Sometimes this can occur if your gums aren’t in the best condition. Due to an overabundance of bacterial growth, this is where the start of gum disease occurs.

Also known periodontal disease, this condition is one of the most common dental problems in America. In fact, the CDC estimates that half of Americans aged 30 or older have periodontitis— the more advanced stage of the disease.

Why is this? Many people aren’t following a proper hygiene routine to take care of their teeth and gums each day, plus they aren’t receiving professional dental care. This can lead to a variety of dental problems in the future, often beginning with gum disease.

Why Do I Have Periodontal Disease?

This inflammatory disease affects the soft and hard areas within the gum line that are designed to support teeth. Gum disease is generally caused by poor oral hygiene due to the buildup of bacteria that leads to plaque and tartar.

With 30 years of dental experience, Dr. Terence Lau says that many patients don’t know if they have gum disease until it gets worse because it’s often unnoticeable to many in its earliest stage, gingivitis. However, without treatment, it can rapidly progress and lead to tooth loss due to the destruction of tissue. 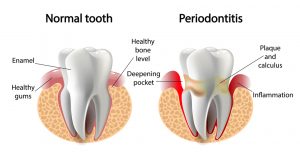 Known as the first and mildest stage of gum disease, gingivitis is inflammation in the gums caused by plaque buildup along the gumline. The plaque will start to buildup when there’s a lack of proper brushing and flossing to remove debris and bacteria from under the gum line and between teeth.

Common signs of gingivitis are:

Luckily, this first stage of periodontal disease is easy to treat by a quick visit to the dentist. The plaque and tartar stuck on your teeth can be removed with scaling and root planing. Additionally, excellent brushing and flossing are crucial for your dental health so the gingivitis doesn’t return! 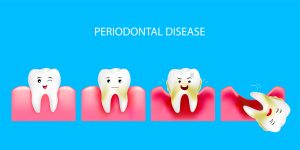 The second stage of gum disease is known as periodontitis. This stage occurs when gingivitis is ignored and not treated. The supporting bone that holds your teeth become damaged and your gums will start to pull away from your teeth, which is much more difficult to treat.

With periodontitis, your gums will form a pocket below the gum line that easily traps food and plaque, which aggravates your dental problem. Along with the similar symptoms associated with gingivitis, you may also notice spaces and pus begin to appear between your teeth.

Along with practicing good oral hygiene, Dr. Eric Herman says he’ll clean out bacteria from the pockets below the patient’s gumline to prevent further bone and tissue destruction.

Advanced periodontitis is the most severe stage of gum disease and will often lead to tooth loss. During this stage, the fibers and bone are completely destroyed which eliminates the ability for your gums to support your teeth.

Once gum disease advances to this stage, there is a higher chance that good oral hygiene and non-surgical treatments won’t be as effective, and alternatives may be the solution. These options may include flap surgery to reduce the pocket size and lift up the gumline, or bone and tissue grafts which help naturally regenerate lost bone and tissue.

What If I Lose a Tooth Due to Periodontitis? 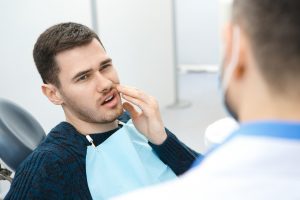 Suffering from tooth loss is one thing no one ever wants to endure. However, if you’ve allowed you gum disease to advance to its most severe stage, then tooth loss may be inevitable. Now, with new developments in dental treatments, replacing a missing tooth can be a simple fix.

Whether you replace one or more teeth with a dental bridge, denture, or dental implant, all of these solutions help enhance the appearance of any smile, improve your oral health, and allow you to eat and speak without hesitation.

Finding a dentist who can restore your smile is the first step. Most dentists are capable of placing a dental bridge or denture, however, not all dentists can place implants. Dental implants are known as the longest-lasting, most natural-looking restorative treatment available today. Dentists like Dr. Albert Internoscia who have been trained to place these unique prosthetics are exactly who you need to find for successful treatment.

It isn’t always easy to take perfect care of your smile, but the more you continue to properly brush and floss your teeth and gums, the less of a chance you’ll endure an oral problem like gum disease. With the right hygiene routine, you won’t have to worry about this common dental disease taking over the beauty of your smile.